How did we become so inured to the inhumanity of our organizations?

How is it OK that a scant 13% of employees around the world are emotionally engaged in their work?

How is it OK that 70% of jobs in the US require little or no originality—this according to the US Bureau of Labor Statistics?

How is it OK that only 12% of employees in Europe say they’re always consulted before objec­tives are set for their work?

How is it OK that the average first-level employee in a large organization is buried under eight or more layers of management?

How it OK that 50% of employees say they’ve had to change jobs to escape an incompetent or autocratic boss?

How is it OK that in a global survey, 79% of respondents from large companies said new ideas get greeted with skepticism or hostility?

How is it OK that in the same survey, 76% of respondents said political behaviors highly influence who gets ahead?

None of this is OK, not by a long shot, but we shouldn’t be surprised. Our organizations were designed to be inhuman. As Max Weber noted more than a century ago, “Bureaucracy develops the more perfectly the more it is “dehumanized.”

By that measure, our organizations should be pretty damned perfect by now, but they’re not.

They are inertial. This isn’t the fault of supposedly change-phobic employees, but of top-down decision structures that create long lags between sense and respond.

They are incremental.  That’s hardly surprising, since bureaucracy has little room for the curios­ity, intuition, playfulness and daring that animates human creativity.

And they lack nobility. How often in our organizations do we hear talk of love, beauty, truth, courage, freedom and justice? Bureaucracies are emotional dead zones.

As a result, our organizations are less adaptable, creative and inspiring than we are.

And it’s getting worse.

Since 1983, the size of the bureaucratic class—the number of managers and administrators in the US workforce—has more than doubled, while employment in other categories has grown by only 40%.

Peter Drucker thought bureaucracy would contract as the knowledge economy grew. In 1988 he predicted that by 2008, “the typical large business would have fewer than half the levels of man­agement of its counterpart at the time, and only a third as many managers.” Well, that didn’t happen.

Some believe bureaucracy is inevitable. They’re wrong.  Dig inside Haier, Morning Star, Nucor Steel, Svenska Handelsbanken, the Linux Foundation, or the Atlas project at the Large Hadron Col­lider, and you’ll discover organizations of enormous scale and complexity that are mostly bureau­cracy-free.

If we’re stuck, it’s not because we lack role models. We have enough exemplars to know it’s pos­sible to buy the blessings of bureaucracy duty-free. You can achieve control, coordination and consistency without consuming 30% of human labor in bureaucratic paper shuffling.

And yet our organizations are still riddled with bureausclerosis. Why? Because—and we need to take responsibility here—we’ve been insufficiently honest about the cost of bureaucracy, insuf­fi­ciently brave in confronting those who defend it, and insufficiently creative in crafting alterna­tives.

So let’s start by being forthright about the costs of bureaucracy.

By our calculation, an excess of bureaucracy—too many layers and too many pointless rules—robs OECD economies of $9 trillion per year in lost economic output. The indirect costs of bu­reau­cracy—friction conformity, insularity, rigidity, apathy, politicking are likely to be even higher, but few organizations have a way of measuring them. That’s a problem, because what doesn’t get measured doesn’t get attention. That’s why we created the BMI—the “bureaucratic mass index”—an instrument that dimensionalizes bureaucratic drag. You can find it on the Harvard Business Review website.

Having calibrated the cost, we need to take on the apologists. Though few executives admit to being fans of bureaucracy, fewer still seem genuinely committed to killing it.

We shouldn’t be surprised.

Bureaucracy is a massive, role-playing game. If you’re an advanced player, you know how to deflect blame, defend turf, manage up, hoard resources, trade favors, negotiate targets and avoid scru­tiny. Unsurprisingly, those who excel at the game are unenthusiastic about changing it.

Yet it’s impossible to dismantle bureaucracy without redistributing authority. We have to face the fact that a post-bureaucratic organization is also a post-managerial organization, where power is no longer calibrated by headcount, budget or decision rights. Now who wants to stand in front of an executive team and deliver that message? Who wants to admit that our forty-year effort to rebrand managers as “leaders” has been an utter failure? (A point made emphatically by Barbara Kellerman in her book, The End of Leadership.)

When a Global 500 chief like A.G. Lafley, twice CEO at Procter and Gamble, says, “The CEO can see opportunities others can’t,” who’s going to say “rubbish?” Or when the former managing partner of a prestigious consulting firm declares that it’s up to a handful of top executives to “shape the destiny of the business … while others have their heads buried in operations…,” who’s going to say, “no, you have it backwards; it’s the people on the edge who are best posi­tioned to see the future coming?”

I’m sorry for being blunt, but I’m in good company, here.

Roughly ten years ago, when I first met Vineet Nayar, then head of HCL Technologies, he said, “The concept of the CEO, the ‘captain of the ship,’ is bankrupt.”

Similarly, in my first conversation with Haier’s CEO Zhang Ruimin, he said, “Our goal is to let everyone become their own CEO.”

Just a few weeks ago, in another meeting, I heard the leader of a highly successful global busi­ness challenge her team to turn their organization “upside down and inside out.”

Unless we are willing to be similarly honest and forthright, we’re part of the problem, not the solu­tion.

But before challenging others, we need to challenge ourselves. In what ways are we still paying allegiance to the bureaucratic confederacy?

To get a glimpse of the belief structures that prop up the old model, let’s examine one of its pillars—the professional HR establishment. Perhaps you’ve heard the phrase, “human resource management.” This formulation is unobjectionable except for two words: “resources” and “man­agement.” What’s toxic here is the notion that people are mere “resources,” rather than multi-faceted human beings, and the assumption that they’re incapable of doing the right think without being “managed” from above.

Most of the post-bureaucratic vanguard were born that way. Even when they weren’t, it’s nearly impossible, years or decades later, to recreate the step-wise process through which they built their distinctive management models. This creates immense problems for anyone who wants to repli­cate a model like Haier’s. There’s no way to cut and paste.

But if we step back, we can see that post-bureaucratic companies are an artful integration of three organizational innovations:

Jolly nice, you may be thinking, but how do we get there from here? Where do you start? How do you avoid the risk of operational chaos? How do you sidestep the resistance of those inclined to defend their power and prerogatives?

Many leaders face what I call the Gorbachev problem—they’re advocates for perestroika and glasnost, but are stymied by the very bureaucracy they’re trying to dismantle. How do you con­vince members of the nomenklatura to give up a big chunk of their authority and start acting like mentors rather than overlords? Point is, you can’t, not by yourself, even when you’re head of the Communist Party—there aren’t enough hours in the day. In a battle between a progres­sive leader and an entrenched bureaucracy, bureaucracy is going to win 9 times out of 10—ask Pope Francis.

We need something that routes around entrenched power structures; that builds a coalition of the willing; that is revolutionary in intent and evolutionary in execution.

Imagine if we encouraged everyone in an organization to think about how they could replace bu­reaucracy with more human ways of working—within their own teams and beyond? What if we asked people for new ideas on how to set goals, craft strategy, allocate resources, evaluate col­leagues and dole out rewards—all in hyper-flat, non-hierarchical ways? What if our organiza­tions were running dozens of management experiments a year, and peers, rather than execu­tives, de­cided which ones to scale up?

going to war with bureaucracy takes guts. But as Tom Peters pointed out three decades ago, it’s a war of liberation.

A few years ago, my colleagues and I set out to do exactly this.

In one early test, we invited 3,000 people from a global sportswear brand to join an online hacka­thon. Each week, for eight weeks, we introduced a new post-bureaucratic principle in an open, online course.  After each module we asked, “what would you do to make this principle come alive in your organization?”

Team members contributed more than 900 management hacks, which were evaluated by their peers—10,000 reviews in all. Twenty of the best ideas were turned into experiments.

What’s novel isn’t the notion of collaborative innovation, or the idea of experimentation. What’s new is creating an all-hands process where change is socially constructed, and rolls up, not out. This is the antithesis of “change management”—an oxymoron if ever there was one.

Whether you’re a CEO or a frontline team member, going to war with bureaucracy takes guts. But as Tom Peters pointed out three decades ago, it’s a war of liberation.

Three hundred years ago, monarchical authority seemed immovable as Egypt’s pyramids. Yet to­day, few us would be content to live in a society where political power is both absolute and an accident of birth.

Two hundred years ago, slavery was an implacable fact. Some people, it seemed, were destined to be property. Today, we regard slavery as an abomination.

A hundred years ago, patriarchy was unchallenged. In countless ways women were at the mercy of men. Today, we see this as a great injustice and are committed to gender equality.

Aristocracy, slavery, patriarchy—these institutions were inhuman at their core. Each was an iron cage—and not always metaphorically.

The point is that deeply-embedded social systems can be changed. Yet when we look back, we realize these social cankers didn’t yield to utilitarian arguments. In each case, the strong, hard wedge that shattered the prevailing social consensus wasn’t a pragmatic argument, but a moral one; not “this doesn’t work,” but “this is wrong.”

Our institutions change when we change; when we trade resignation for indignation. It’s time to admit what we have long known: our organizations are at odds with our values—not just in how they foul the environment, misuse our personal data, or corrupt the political process, but in how they treat the human beings whose lives they consume.

When this conviction becomes fixed in our hearts, and when we surrender our interests in pro­tecting the status quo, we’ll have the chance, at long last, to build organizations that are as amazing as the people who inhabit them.

The Core Incompetencies of the Corporation 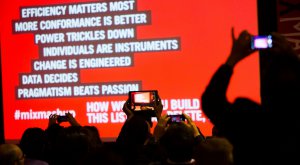 at McKinsey & Company
View all